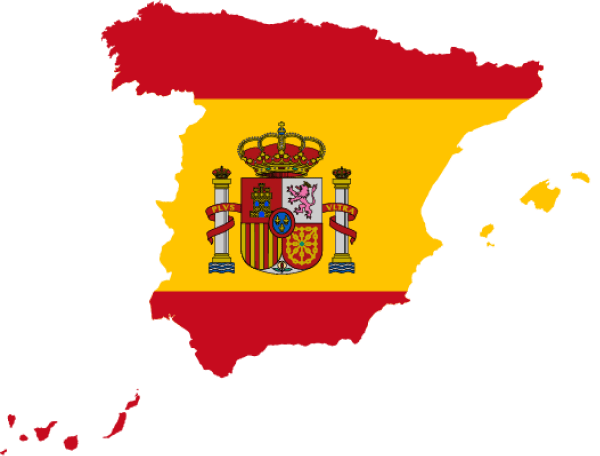 According to the research made by the University of Lyon, Spanish is considered to be the easiest language to learn. No wonder it is ranked as the world's second widely spoken language after Chinese (Mandarin). Besides, it is the third language widely used in the net, after Chinese and English.

Spanish is the official language in Spain Equatorial Guinea and Hispanic America (19 countries, among them are Argentina, Chile, Cuba, Mexico, Puerto Rico, Venezuela, etc.). Besides, Spanish is used as the official language in the United Nations, the European Union, the Community of Latin and Caribbean States, and other international organizations. Being spoken worldwide, it is the minority language of such countries as Andorra, Belize, Gibraltar, and the USA.

Being such a popular language across the globe, it has about 577 million followers. Among them are 480 million native speakers, 75 million people speaking Spanish as a second language, and about 22 million students learn it.

The letter ‘ñ’ is of Spanish origin and is present only in this language. Spanish contains many English loan words (fútbol – football, pullover – pullover, overol – overall). There's no direct word to translate the verb "like" in Spanish. There are two ways to say the phrase "I love you" — “Te amo” and “Te quiero”. Want to know the difference? Learn Spanish!

There are 17 tenses in Spanish and 3 moods (Indicative, Subjunctive, and Imperative). Spanish nouns with the identical spelling can change their meaning, while used with a different grammatical gender (for example, la cometa — the kite, el cometa — the comet). Punctuation marks begin the exclamatory sentences and questions, and are unique (¡)(¿). The sentence or question ends using the common question or exclamatory mark (¿Habla usted inglés? – Do you speak English?).

You have definitely come to the right place to learn Spanish online for free. Studying with our interactive lessons is the best way to learn how to speak Spanish fast. Even if you're a beginner, you'll be surprised how easy it is to become conversational using our free audio Spanish lessons and free downloadable software. If you are a teacher, we have Spanish PowerPoint lessons.

Have you ever wondered if you could learn to speak and write Spanish in two weeks? This website will teach you the basics of how to speak this language fluently. You can either practice building Spanish sentences or even teach yourself Spanish. There are over 150 free lessons on our online platform. There are fun review games, interactive lessons, and other activities. If speaking is your goal, you’ve come to the right place!

Even if you're a beginner, you'll be surprised at how easy it is to become conversational using our free audio Spanish lessons, free downloadable software, or if you are a teacher we have Spanish PowerPoint lessons.

How to Speak Spanish

Ever wonder if you could learn to speak and write Spanish in two weeks? This site will teach you the fundamentals of how to speak Spanish fluently: You can either practice forming Spanish sentences or you can even teach yourself Spanish!

There are over 150 free lessons here on this site. There are fun "Lingo Dingo" games, “Learning Lounge” lessons and “Memory Machine” activities. If speaking is your goal, you’ve come to the right site!

To our knowledge, this is the most complete language-learning website in 8 major languages. Once you're done learning Spanish, you can try your luck with other romance languages as you attempt to learn Italian, or you become fluent in the language of love as you learn French.

Learn Spanish and find the satisfaction that comes as you learn a foreign language. Our hope is that you become fluent in Spanish, and tell all your friends about us. Spread the word! (You can't beat learning Spanish for free!)